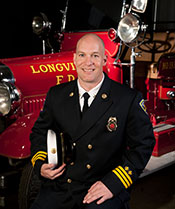 The Assistant Fire Chief of Operations oversees the department’s daily operations, including 2 Battalions and 6 Battalion Chiefs with a total of 162 field personnel. In addition Chief Bates coordinates the fire fleet and maintenance service needs as well as apparatus and equipment replacement.

Chief Bates has served as a hazardous materials technician on the Special Operations Team and also as a technician on the SCBA repair and service team. Chief Bates has participated as a past member on the department’s hiring board, recruiting committee, the strategic planning committee and was a founding member of the Heroes of Tomorrow summer camps.

Chief Bates has obtained his Associate in Applied Science degree in Fire Protection and has his Master Firefighter certification from the Texas Commission on Fire Protection. In addition, he has obtained his designation as a Certified Fire Executive, a Fire Service Chief Executive Officer as well as numerous other certificates from the National Fire Academy. Chief Bates and his wife Kimberly have two adult children, son Kelby and daughter Brooke.

Chief Green has a Bachelor’s Degree (BAAS) in Organizational Leadership from Texas A&M-Commerce. He has also earned 2 Associate’s Degrees from Weatherford College in Fire Services Administration along with Fire Protection and Safety Technology. Steven has completed the Fire Service Chief Executive Officer (FSCEO) program through TEEX and the Certified Fire Executive (CFE) program from the Texas Fire Chief’s Association.