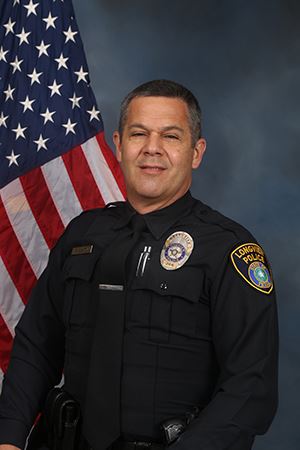 Officer Chris Clayton joined the Longview Police Department in February of 1989. While serving as a patrol officer, he was a uniformed Crime Scene Investigator, a member of the SWAT team, and received the Police Commendation Award. Officer Clayton has also served as a School Resource Officer and as a detective in the Criminal Investigations Division.

In 1997, Officer Clayton graduated from Louisiana State University in Shreveport with a Bachelor’s Degree in Criminal Justice. He has also earned his Master Peace Officer Certificate through TCOLE. Officer Clayton has served in the Louisiana National Guard and is a veteran of Operation Desert Storm. Officer Clayton is currently a member of the Crisis Negotiations Unit and the Texas Association of Hostage Negotiators.

As the Police Area Representative for Beat 20, his duties include the implementation of neighborhood improvement projects and working with the citizens to help reduce crime and solve problems in the community. Officer Clayton was responsible for assisting the other City of Longview Departments in developing a plan for RENEW! Longview 2013.
Beat 20 Police Area Representative Office
Longview Mall, 3500 McCann Rd.