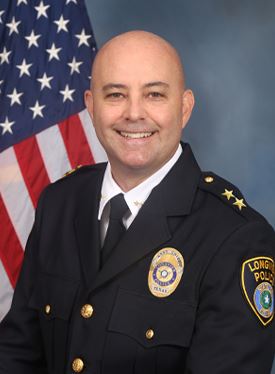 Assistant Chief Benjamin KemperAssistant Chief Kemper began his career with the Longview Police Department in January of 2002. He is a Longview Lobo, having graduated from Longview High School, class of ’93.  He went on to receive a Bachelor of Arts degree in Criminal Justice from Sam Houston State University in 1997.  In 2019 he completed a Master of Science Degree in Criminal Justice from the University of Oklahoma.

Assistant Chief Kemper served as a patrol officer, Field Training Officer, and as a Detective working financial crime until his promotion to Sergeant in 2006.

During his tenure as a Sergeant, he was appointed to the Office of Professional Standards, supervised the Special Investigation and Apprehension Unit and as team leader of the Crises Intervention Negotiations Unit.

In February 2011, Assistant Chief Kemper was promoted to Lieutenant where he served as the night shift patrol commander. He then spent time supervising the Special Operations Division, the Criminal Investigations Division and as commander of the SWAT Team.

He was appointed to Police Captain in February 2019, supervising the Operations Bureau.

Assistant Chief Kemper is a graduate of the 48th session of the ILEA (Institute for Law Enforcement Administration) Management College, the 261st Session of the F.B.I. National Academy, and holds a Master Peace Officer certificate through TCOLE.