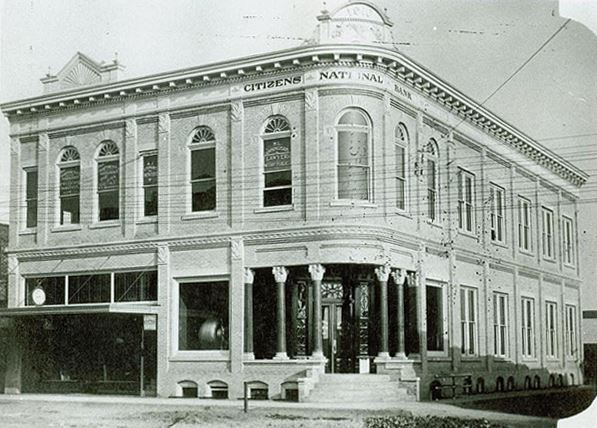 This building is located at 214 North Fredonia Street and stands in an area of downtown where almost all 19th and early 20th century buildings have been razed or altered.  The building was built in 1910 and is the only example of 20th Century Classical Revival commercial architecture in the city.

The Everett Building is a two-story building with a raised basement.  The building faces the southwest corner of the property with a rounded bay and recessed main entrance on the first level.  Four freestanding pink granite columns and two pink granite square columns flank the entrance to support the second story bays above.  The majority of exterior features to the building are original, including the primary entrance, Ionic capitals and pilasters, and pink granite composite order columns.  Alterations to the building have been minimal.  The original commercial front on Fredonia Street has been replaced.  Early photographs show an elaborate raised panel above the cornice at the south corner with the date embossed, 1910.  Another ornate raised panel was situated above the cornice on the northwest elevation, indicating the secondary commercial space on Fredonia.  Both of these have been removed.

Between 1960 and 1979, the structure remained virtually empty, except for special temporary activities such as the Longview Centennial in 1970 and the U. S. Bicentennial in 1976.  Ann Lacy Crain purchased the Everett Building and donated it to the Gregg County Historical Foundation in 1979.  The Gregg County Historical Foundation, which had been chartered by the State of Texas in 1966, had always hoped to have a permanent place to display its collection of historic Gregg County artifacts, documents, and photographs.

The Everett Building is listed on the National Register of Historic Places (1979) and is a Recorded Texas Historic Landmark (RTHL) (1983).