Who was Maude Cobb? 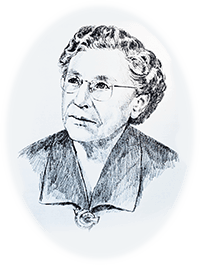 Maude Cobb (October 9, 1880 – October 29, 1964), was an industrious, genteel lady, sold newspapers at the post office corner in downtown Longview from the early 1930’s until her death in 1964.  She was a friend and an inspiration to everyone in Longview, from the richest millionaire to the roughneck who just arrived to start work in the oil field.

Her constant companion was her beautiful granddaughter, Cecile, who helped her sell papers.  From this humble beginning her granddaughter became an outstanding leader and benefactor in the business, cultural and civic life of Longview.

Only in the United States of America, which nurtures the freedom of individuals to work and accomplish, could such a facility as this be made possible through a grandmother and her granddaughter who sold papers only a few years ago.

The Maude Cobb Convention Center shall enhance the quality of life for all people in this community and shall be a focal point for all phases of cultural, civic, and community activities.  But most of all, it shall be an inspiration to present and future generations to follow the example set by Cecile Moeschle – to do something that will make this world a better place in which to live.