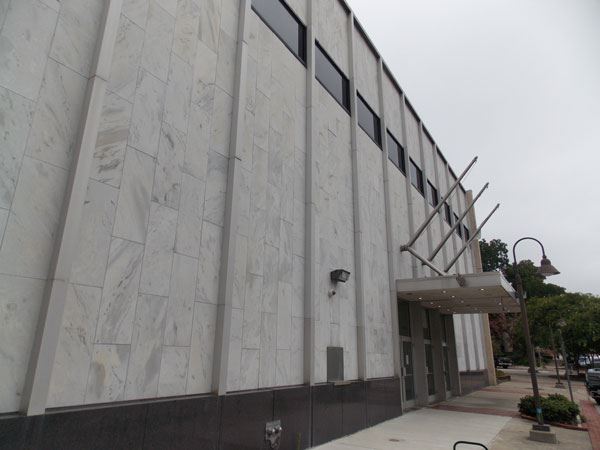 This building is located downtown and is addressed as 213 N. Fredonia St., south of the Gregg County Courthouse. The original two-story structure was built in 1940 with an Art Moderne façade and currently occupies the southwest portion of the space, adjacent to Bank Alley.  The building was expanded upon in 1958 with the help of architect and Longview native B. W. Crain, Jr.  The current building is a two-story structure with a basement and a two-story garage with a drive-through banking corridor.

The Longview National Bank has characteristics of the Modern Movement, which was a period from World War I through 1970. One of the featured traits of this movement is the use of minimal ornamental application.

The building has an exterior facade that has white Alabama marble and grey granite panels with a concealed parking garage on the north side facing Methvin Street. The interior has many design features that the museum will preserve including terrazzo floors, white Alabama marble columns, a custom-designed mosaic counter by Herbert Mears and a wire sculpture called "The Great Lone Star" by noted sculptor Richard Lippold.

B.W. Crain, Jr. of the noted regional architectural firm Wilson, Morris, Crain & Anderson, designed this building along with many others throughout Longview and Texas. In addition to this building, Crain and the firm designed many other buildings in Longview including the Petroleum Building, Trinity Episcopal Church, and First Baptist Church, as well as several private residences.

Guaranty Bank was formed in Longview, Texas, in 1912 and was sold to F. T Rembert in 1918. Rembert moved the bank to 101 S. Fredonia St the following year, and he renamed it Rembert National Bank in 1923 after it went nation-wide. In 1932, the bank relocated to 214 N. Fredonia St, directly across the street from the present-day Longview National Bank location. The bank was renamed the Longview National Bank in January 1940 and built a new facility in September 1940.